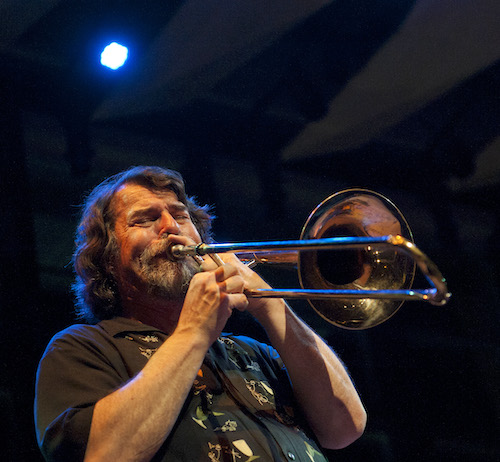 With a history extending back to the turn of the 20th century, today’s jazz continues to entertain, educate, and celebrate those who keep this uniquely American genre alive. One of the foremost proponents of jazz was the late Dave Brubeck, an American jazz pianist and composer, who began his musical journey in the early 1940s and remained an active performer until his death in 2012.

The Brubeck Brothers Quartet maintains the very essence of jazz through the Brubeck bloodline (his sons Chris and Dan). With an incredibly varied and musical background, this group is not only a compliment to Dave Brubeck’s original quartet but a felicitous homage to one of the greatest jazz influences of all time.

Bassist and bass trombonist, Chris Brubeck provided Al Torres a history of the group during this interview.


Al Torres: Tell me a bit about the background of the Brubeck Brothers Quartet.

Chris Brubeck: The basis of the group has been me and my brother Dan, who plays drums. I started out with a successful rock and roll band and by the mid-70s we had three record deals. When we started running into business frustrations my dad said, “Don’t be blue, come on over and play jazz with me.” I did just that and had a great time playing in his group for many years. Dan had a fusion band called The Dolphins in the 70s and 80s that put out three albums. One of the members of that group was Mike DeMicco, who is our guitarist. One of the cool factors about Mike DeMicco was that he was also a great bebop player. As the fusion era began to die down a bit, Dan suggested playing more “straight ahead” and asked me to join him and Mike. Our pianist, Chuck Lamb, is a great musician and has performed with numerous renowned artists like Bela Fleck, the Woody Herman Orchestra, Ernestine Anderson, Eddie Daniels.


AT: Tell me about your albums.

CB: We did a few albums where we did not perform any Dave Brubeck material mainly because we wanted to make sure we were carving out our own identity. Those albums were Second Nature (2000), Intuition (2006) and Classified (2008). We then made Lifetimes (2012), which did contain some of Dave’s material and did quite well. Our most recent recording, Timeline (2018) is a celebration of Dave’s big state department tour in 1958 where the group first heard Turkish musicians play in odd time meters and is how‚“Blue Rondo a la Turk” came to be on The Dave Brubeck Quartet album, Time Out (1958).


AT: Who does the writing for the group and what is your writing process for albums?

CB: We all write. Basically, we look at a record opportunity and think, “What do we need?” Then we move forward with who writes what. Chuck Lamb is very prolific and puts out read-ready jazz tunes all the time. I wrote a lot of the material on the Intuition album and I liked how it all turned out. Most of the time I try to write less because Mike also writes tunes as well; he had his own solo record, and it was filled with great tunes. We play lots of orchestra concerts too. I write all the orchestrations – that is my department. I often get asked if I prefer writing solely for our group or hearing the London Symphony play my charts. Both are equally satisfying but one takes longer to write. When I write a chart for an orchestra it takes about a month to write a full orchestration. When I write for a smaller group like our quartet, it can take maybe 10-minutes to write a lead sheet and then perform it equally artfully as the orchestra.


AT: Have you had a famous performance or one that is significant for the band?

CB: I think one of the best performances was in Yokohama, Japan with Dave’s group. We played at Yokohama Stadium to an audience of about 35,000 at a Jazz Festival in the mid-80s, and it featured some famous groups, such as Jaco Pastorius Big Band and Woody Herman. That was just a great time. Another significant performance was in Caesarea, Israel. Dave’s group played in a Roman amphitheater. Seeing the bleachers carved in stone and the reflection of the full moon on the Mediterranean Sea was a highlight at that performance. Do you feel that you must maintain your dad’s image at every performance? You know, I am very conscious of that. Part of it is because we know what Dave meant to a lot of people. Not only do we live up to the legacy of his performances, but we, his family, contributed to that legacy. In fact, his wife, Iona, was so vested in his career that she invented the idea of moving jazz bands out of night clubs and into the performance theaters. She was a brilliant businesswoman in that regard. Playing and recording with his offspring always delighted Dave. Whether it was in the studio or performing in a venue, having his children up on stage alongside meant the world to him. He felt that he and his family brought joy to the world by means of music. I remember a fan once saying to me,“Well, your father cast a long shadow,” and I replied, “Yes, yes he did, and our shadows are intertwined with his.”


On June 26th, you have two opportunities to see the Brubeck Brothers Quartet. At 4pm, they're offering a FREE workshop about the history of jazz along with music demonstrations and a Q&A. Register here.

Then, at 7:30pm, the quartet will perform a live concert. Get your tickets here.