CATS’  Participation in the Holiday Festival 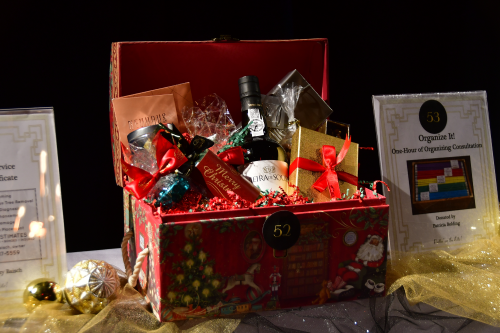 CATS have been making magic since they  produced the inaugural Festival in the brand new Community Theatre in 1989. “From the beginning, there was a real sense of magic about it,” said Ruth Fleming, who co-chaired the first festival with Catherine Skinner. “People got very dressed up.  It brought a lot of Christmas spirit into the Theatre and the whole community.”  From the first year, when only six trees were auctioned off in the lobby, CATS recognized the potential for the gala event to be the cornerstone of the holiday season in Friday Harbor. The format has evolved to what it is today but as the tradition continues, CATS continue to play a vital role in this annual fundraiser for the Theatre’s capital needs.  The Steering Committee and volunteers are mostly CATS members with support from the Theatre staff.

In 1999 the Live Auction consisted of 50 items, and the Silent Auction had more than 75 items. Included for the first time was a boutique table for inexpensive items for the hard-to-shop-for person .

Beginning with the 12th annual Festival, in 2000, in addition to the trees, wreaths and decorations, donations were solicited from Island artists, hobbyists, community merchants and businesses.  This concept met with great success not only for the Theatre, but by providing exposure for the donors.  The program that year honored Stan Kramer and Ted Soares. The Live Auction was in two parts and the Silent Auction closed at the end of Intermission.  Prior to the event, CATS hosted an all-day workshop with  participants making centerpieces, wreaths, etc. which would be auctioned. 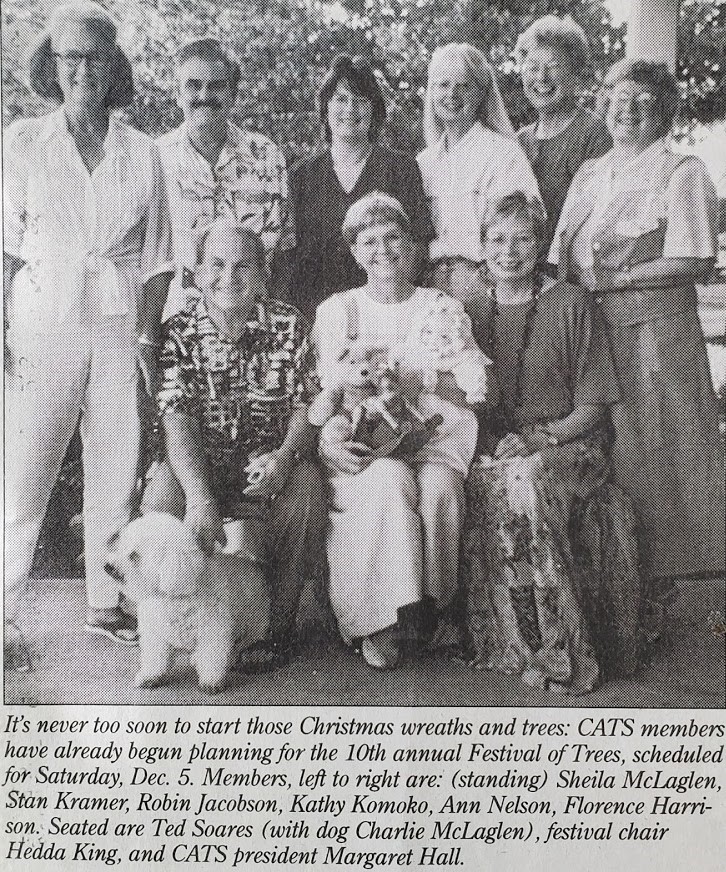 In 2005, the Live Auction included the following donations:

In 2011, and 2012, CATS held a Catalog Party and a Donor Party shortly before the Festival.  The former was intended to preview the items in the Silent Auction.  The latter was held to thank donors for their participation. In 2013, these events were combined and later cancelled as it was determined that the attendance didn’t warrant the work involved.

In 2012, a raffle was offered as an item in the Live Auction. Tickets for the prize of a Holland America cruise were sold by CATS members. Raffles were again organized by CATS members in subsequent years, with the prizes being  a choice of vacation trips or $5000 in cash. An article in the CATS 2015 January newsletter reported especially good news:

Good job, CATS! We raised a gross amount of $18,866 for the Theatre in raffle sales. The odd amount is due to a few donations. Your committee thanks each of you for selling, buying and working so hard. The best part is that the winner, Ken Blaker, donated the $5,000 back to the Theatre in the Fund-a-Need part of the auction. So the Theatre was a true winner! When you see Ken and Sue, please thank them for their generosity.

The first Magic Bus Dinner, conceived and organized by Ann Nelson, was an item in the 2012 Live Auction. It featured a progressive dinner for eight, with stops at five homes, each highlighting a different venue. An apt description of the evening by David Bayley, one of the participants, follows:

“Heading to the Southwest, we found ourselves at Mary Sliger's, where an animated group of ladies in western attire served up ribs, slaw and corn bread and great wine.  They were having as much fun as we were!   Much laughter, western line dancing around Mary's kitchen, and of course, continued attentive service.

Our final stop for dessert at the home of Don Pollard and Dave Ralston was a great finale. Tiki torches lit the entrance way, fresh orchid leis flown in from Hawaii were ceremonially placed around the women's necks, while the guys received necklaces of polished black seedpods. Grilled pineapple and ice cream, accompanied by fine champagne and Kona coffee, topped off an outstanding experience.”

The Magic Bus Dinner was repeated the next two years. In 2014, chaired by Margaret Hall and Sally Shannon, it included mini-van door-to-door transportation, but featured a different theme and venue. Four Mediterranean “Ports of Call” were visited, each different in its décor and menu of appetizers, soup or salad, entrée and dessert.

CATS was also involved with these additional Holiday Festival projects:

Susie Allen chaired this item one year. She arranged for Stan at King’s Market to recommend wines in the $12 to $20 price range for CATS members to purchase and to then donate. The goal would be to make the basket special for the Live Auction. Susie suggested the basket be filled with 52 value- and award-winning wines, one per week. Someone noted that a large and sturdy basket would be required! This project was continued in subsequent years, appearing in the Live or Silent Auctions.

A balloon bouquet was offered during the early part of the evening. For $50 a pop, the lucky poppers were guaranteed to win an item worth $50 or more. This project was a great money raiser but didn’t last very long, as the noise was deemed to be too bothersome.

The Gift of Christmas

In 2016, Norma Barrett and Georgann Greene were co-chairs for the Gift of Christmas, a Live Auction item. Norma reminded everyone at the October luncheon that the Gift of Christmas is a way for CATS to reach out to the community by helping a family in need. She asked that CATS donate cash so that gift certificates for food, prescription drugs, and gasoline could be combined with other gift certificates from local merchants. Julie Hanks personally pledged $100.00 and challenged CATS members to match that amount in donations. A basket was passed and over $500.00 was collected!

This project has been repeated at subsequent Festivals. At the October 2019 luncheon, Kathy Schwartz, CATS President, announced that CATS members had donated $950 to support the Gift of Christmas. This was nearly double last year's donations.  Additional donations were collected and two Gifts of Christmas were offered.

Kathy also noted that, for the 2020 Festival, CATS capable Silent Auction chairs and helpers procured nearly 100 donations, plus, for the Live Auction, the TWO Gifts of Christmas and 52 bottles of wine. It was an astounding display of CATS demonstrating their generosity with time, talent, and treasure. 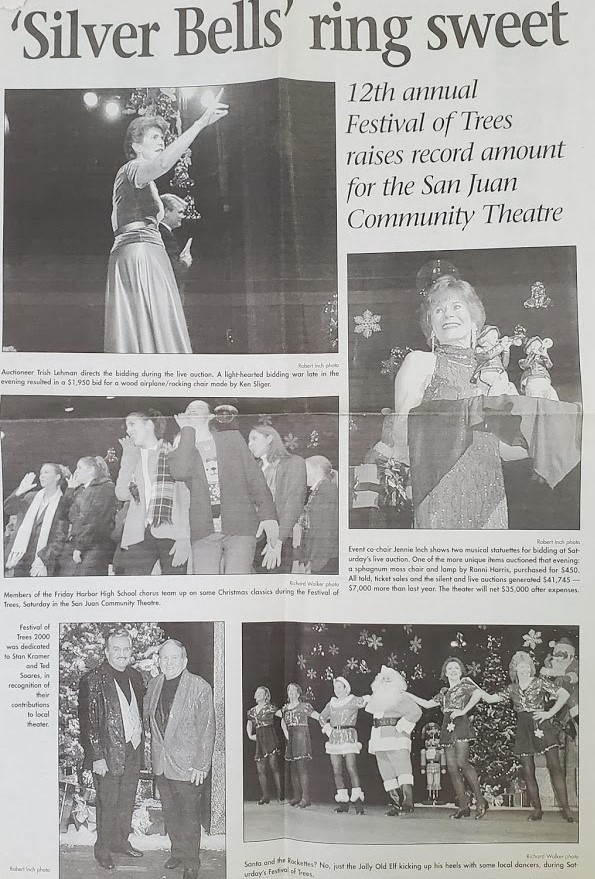 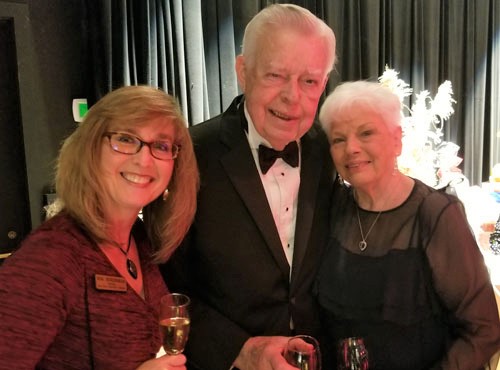